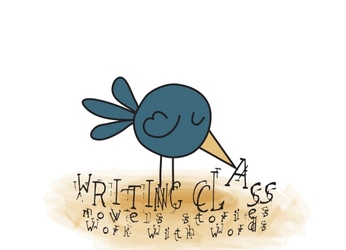 Thursday 5.00-6.30 Advanced Secondary Class -  Years 9 & above. Or by invitation.
Thursday 7.30 -9.30 Adult class - This is a great class with a variety of ages, with diverse interests, making it an awesome class to coach, and attend.

​I create new classes every week, depending on what's going on in the world. I am encouraging, supportive and I always strive to make the classes fun!
Students are $15. Adults $20
Pay as you go, no long term commitment.

The adult class was inspired by one of my favourite Australian Artists, Russell Drsydale this week. 35 minute write time. I liked mine, hope you do to.
The Seymour Women.
Mildred McKenzie was the salt of the earth. Steady, reliable – the sort of woman who could kill a black snake without so much as a whimper for a bloke’s help. Just as well Don was tosser, and scared shitless of snakes. She lived this side of the highway, past the old footy ground, the one where the clubhouse was burnt to the ground by Billy Connors when Seymour got trounced by Mansfield in the Grand Final.

Over the way – down past what used to be a fairly decent creek before the blasted drought of 47, lives Florence Kennedy with her three kids and that no good husband of hers, Kenny. KJ he insists they call him, but that’s just dressing it up. A no hoper is what he is.

Then if you keep going, past the old schoolhouse where Father Bronson used to whip the kid’s bare arses if he had a mind to, is the Cleary property. Being just over the hill makes a huge difference in this rain strapped country – 2 inches doesn’t sound like much but when it’s just over 15 inches for the year, those 2 inches are vital. The Cleary place is a dust bowl, except where those 2 inches dump on the powder fine earth and it turns into a bog patch. Mrs Cleary, as she is known, is as strong as nails, but when it comes to Paddy, she’s just as vulnerable as any woman folk out here at the top end of Vitoria.

The menfolk, well that’s a different story – this story about the day those blokes turned up at Moody’s Pub at 12 noon on a Saturday afternoon and were never seen again.

Folks all have their own version of what happened on that Saturday in December when the mercury hit 98 at eleven and didn’t go down again until Christmas Eve. But it was all said and done by then, and Mildred McKenzie, Florence Kennedy and Mrs Cleary were left with the dried-up paddocks and not much else.
When you ask the people of Seymour what happened, they look away, or change the subject to the cricket or footy, or any other god dam thing but the truth. But I know the truth, not the bullshit story they wrote in the paper, or whatever was said at the inquiry – I know because I was there.

The barman, Jock Fitz, was fed up the bloody heat like we all were, and Don Mac and KJ were going at it, blueing over who was our most famous sportsman. Donny reckoned it was Bradman, but KJ kept saying Pharlap, but Don said that didn’t count, and any fool would agree with that, but KJ kept at it. Paddy Cleary tried to talk some sense into him, but it was close to 3.30 and KJ had sunk pint after pint trying to quench his thirst and because they were in a shout, they all kept up. In the end Jock Fitz threw the lot of them outside to cool off.
​
They were having a smoke when a car pulled up and out gets a city bloke in a dark suit and hat. He made himself at home on the front step puffing away on a pipe and no one thought much of it.
I happened to be walking on the other side of the street, looking for a bit of business before the blokes went back home to their wives, so I heard the city slicker when he started up about an old gold mine he’d found, which is why he had a nice new vehicle and fancy threads. Being an astute businesswoman, I turned my attention to him, but he said, I wasn’t his type. I tried a bit harder with the others, cos everyone knew none of their missus’ were putting out, but the city slicker told me in no uncertain terms to take a walk, so I figured I might as well. I had a room above the pub with a fan that gave me a nice cool breeze so I figured I might as well take advantage of that myself.

I was up there, looking out the window when I saw those lame brains all pile into that fancy car – all laughing, joking and hanging out the window with their fags.
I never told anyone, cos no one wants to hear from my kind of lady and customers need to know, I don’t say a word, no matter what!

They found McKenzie, Kennedy and Cleary’s bodies out by the creek bed a few weeks later. Christmas Eve just as the mercury dropped to 62 degrees.
​
There was a rumour that Mildred, Florence and Mrs Cleary paid money to a city slicker to do away with their useless husbands, but no one saw anything, especially not me.

Since commencing this business five years ago, (thanks Facebook memories)! a lot of people have passed through, and some, I am very pleased to say/boast have gone on to achieve some awesome results.

How to Write a Book - year long course:

1: Tim Foote - author of his self published book - Its Just a Ride. When I first met Tim, he didn't really have too much of a clue, but I soon discovered he had a big, big story to tell. He had first penned his ideas while being held in Guantanamo Bay after over-staying his welcome in USA. Tim worked tirelessly, getting up at four or five each day to get his words down on paper, and the more he learnt, the more he wrote and the better his sentences developed. But it was Tim's hard work and drive that saw his manuscript published and launched in various countries of his travels.

2: Desmond O'Neill - author of Timid Drop - published through Jabiru Publishing. Des worked on another manuscript during his How to Write a Book classes, but he took that knowledge when he moved to Cairns and the Atherton Tablelands where another passion ignited - photography. Des' book is inspirational as well as a clever use of two medium married together.

3: Kim Foale- did an amazing job on her manuscript during the year of our classes. But like Des, Kim moved to Queensland where she joined other classes and continued her quest to see her manuscript published, in one form or another, and I get the feeling that won't be too far off. Whilst waiting for this dream to come true, Kim continues to write and even won the Association of Authors recent Flash Fiction taking out first place! That is very impressive because only writers enter this competition. Awesome! Awesome! Awesome! This year Kim has a series of children's books, so I think 2020 will be big year for Kim.

That's three out of six who went on to realise their dream!

Other Notables:
​Flora Sciarra was always a very keen writer, but at first she lacked the skills and experience to let herself go, but like others, she persevered. It did not surprise me when she was accepted into her Certificate 4 in Professional Writing and Editing at Victoria University. Likewise, I am delighted to congratulate her on receiving her certificate last month. Woohoo. That's amazing Flora!

Eve Nankervis, is a Year 9 past pupil who attended classes and holiday programs for many years. This year, Eve was commended in the 2019 My Brother Jack awards in the Junior Secondary School Poetry Category with her poem, Caitlyn and her Dream. Well done Eve!! That's amazing.

Natasha Grant, who has been attending classes for the past few years and has now become my first pupil to graduate from Secondary classes into the Adult Class. Tash is also my helper when I dash away for a week or so. But mostly, Tash has grown from a shy, reserved Year 9 into a composed, wonderful young woman who got an awesome ATAR and is off to do a double degree, Science and Creative Writing.
​All your Creative Writing Class family are extremely proud of you!

With an increased emphasis on well-being, the advantages of handwritten creative writing can’t be overlooked.
I write because I LOVE IT; and I share this passion with FUN classes in a very supportive environment.

Leeanne Vernon is the author of the top-selling Netball Dreamz series.

Brighton Grammar Visit:
"Leeanne ran a very focused and customised workshop for our classes of Year 9 boys. She covered character and setting in ways that were very accessible and the boys produced some excellent work.
I really liked the way she included all the students and didn’t let anyone hide in the corners."
David Nixon
English & Literature Teacher
Brighton Grammar School

I am happy to visit your school and conduct creative writing classes; they're fun and really motivate the students, primary or secondary, to enjoy
and embrace the creative process.

I wrote my first play in Grade 5, which was performed in front of the entire school.
I started writing my first novel in Year 8.
Getting published was my dream.
Now my name is on the front cover of seven different books.

Do you want to write? Don't put it off any longer.
Do something about it now.
You'll be so glad you did!